A warm welcome from the Finny team!

The team at The Finnygook Inn are, without exception, a friendly and enthusiastic bunch. The Finny is run by Erika and Neil who have been here since 2014 – “We don’t think a pub should be over complicated – we wholeheartedly believe that a great pub is made from a warm friendly and buzzing atmosphere, excellent food and drink and being the meeting point of the village and surrounding area.”

Neil grew up in pubs and hotels and has been a chef for longer than he wants to admit – but his passion and perfectionism hasn’t diminished during the time. The food is properly home-made by skilled chefs and Neil strives to source the best quality ingredients from as many local suppliers as possible. Partner Erika comes from a slightly different world, but has always been customer facing and simply loves people and a chat! 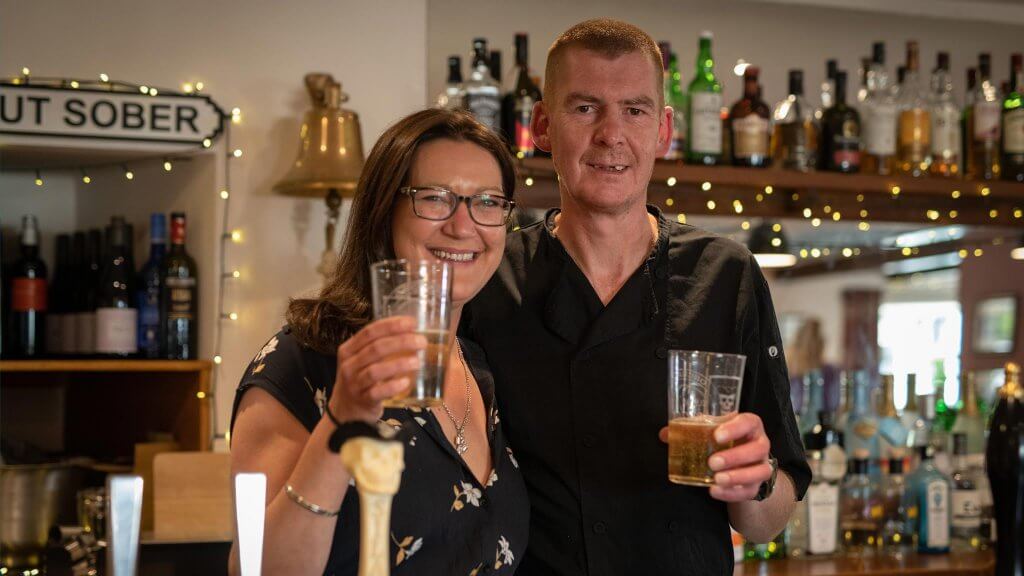 “Our priority and main aim is to serve restaurant quality food in a relaxed pub environment. Add into this the fact (even if we do say so ourselves) we’ve gathered the best team, welcoming bar, amazing views and an energetic and buzzing atmosphere – we’re just so very proud of what the Finny is.”

Whilst the Finny has a healthy amount of history from years gone by, we’re managing to create some more modern history of our own, namely the fire of 2017…

11th December 2017, after a perfectly normal morning things started to unravel. A devastating fire had taken hold in the roof. 16.05, the feeling that something was wrong – 16.07 the feeling that something was very very wrong – 16.08 the fire brigade were called. There started a night that many try to forget. The fire had taken hold in a devastating way. 7 fire engines and 6 hours later the fire was out. Amazingly and so very luckily nobody was hurt (including Tribute the dog) but nobody could know the shear scale of the damage until the next morning. It was bad. The amazing Firefighters had done everything they could but it was obvious the effects were worse than thought.

Fast forward to November 2019 – The Finny rose from the ashes.

In a wonderfully British way, The Finny is familiar with just the odd change (think Great British Bake off when it moved to Channel 4).

The main changes are hidden. Erika will still be leading the chaos out the front, Neil will still be heading up the kitchen, many original members of staff have returned and the pub and restaurant is undeniably and stoically still The Finny. We just now know what all the light switches do.

So we’ve had fire – we got flooded when the roof was off, now we’ve had pestilence, – what could possibly be next?!